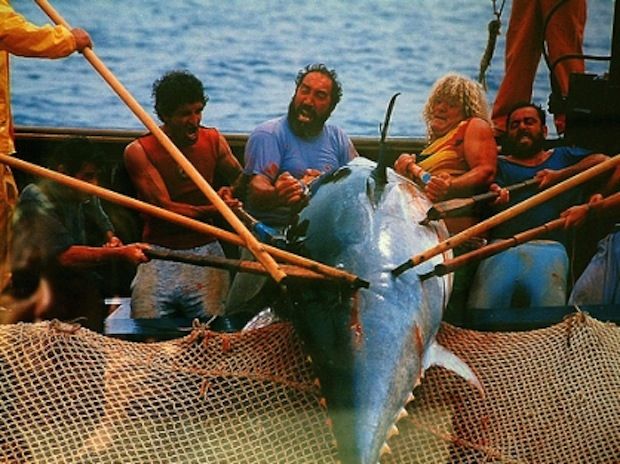 “In 2016 the Mattanza Returns to Favignana After Nearly 10 Years.” La mattanza (translated literally means the slaughter or massacre) is a traditional method of tuna fishing via the tonnare, a trap like construction of nets that coaxes and encloses the larger tuna fish in order to be harpooned and then loaded into the waiting boats. When the tuna, often weighing more than 50 kilos, are harpooned, the crystal clear waters of Favignana turn a vivid red from the blood of the fish. It’s a gruesome spectacle both loved and deplored by many.

The last mattanza was seen 2007. The tuna fish had become scarce due to heavy fishing by Japanese fishermen in the Atlantic before the fish had had a chance to reach the Mediterranean. Following the Atlantic current, between May and June the schools of tuna move beyond the Strait of Gibraltar, reach the Mediterranean and swim towards the coast of Sicily. At this time, the sea around the Egadi islands is ideal for procreation and the deposition of eggs due to water temperatures between 17 and 18 degrees celsius. The tuna population has increased many fold since 2007 and the authorities have recently authorised the Mattanza as a form of culling.

In the past, by mid-April, the tonnaroti (tuna fishermen who engage in the mattanza) would begin to drop a complex system of nets in the sea between Favignana and Levanzo. These are made of “rooms” from which, once entered, the tuna cannot exit. The “rooms” communicate via mobile networks called “ports”. The ports are a weave of opening and closing spaces which take advantage of the natural tendency of tuna to spin counter clockwise. In this way the fish are pushed towards what is commonly known as the “death chamber”. From here it’s a dead end literally. The boats then enclose the tuna in a space and begin to pull the network of ropes which continues to narrow forcing the fish towards the centre of the space. At this point the rais (chief) aboard a boat called a sciabica (trawler) begins the slaughter by harpoon. Traditionally this is accompanied by the cialoma, a series of ancient songs ranging from the sacred to the profane that give rhythm to the slaughter.

All that remains today of the Mattanza are examples of the nets on display in an exhibition at the town hall and in the old restored Stabilimento Florio known as the Tonnara. The Stabilimento Florio is now a museum; a superb jewel of industrial archeology restored to the tune of over 14 million Euro. “Here the tuna arrived alive and departed in a tin”, repeats the guide of the current tonnara. The industry has for years provided jobs to residents of the island, which today number about 3 thousand. The women worked in the canning section while the men were engaged in the heavier tasks. “For us, the tuna fish was like the pig; no part of it was wasted” “Of course, while the mattanza existed, it gave work to so many people here on the island.”

Former tuna chiefs or rais can still be seen in the narrow cobble stone streets of Favignana. In grocery stores historical photographs portray them fishing, in the act of hauling up “beasts of even 600 pounds.” Here they are like movie stars. One of the most famous, Clemente Ventrone, appears on a billboard just across from the harbor advertising a brand of tuna. One of the last rais, Gioacchino Cataldo conducted the mattanza for eleven years and was a regular tuna fisherman for thirty-three. A man of few words, he lists the caught tuna: 772 in 1997, then 1,250, 1,240, 750, 740 and 750 in 2002. A plaque in the Stabilimento Florio speaks of the historic mattanza of 1859: 10,159 tuna were caught that year. For millennia La Mattanza has built the identity of the Egadi islands.

A possible return of the mattanza seems feasible since “big tuna” are again surfacing. The news although eliciting conflicting emotions, may see a return of great social, economic, political and even cultural influence for the Egadi islands and the Trapani region. It is certainly welcome and greeted by the locals of Favingana as a “golden” revival. For the tourists it may prove to be a thrilling but macabre spectacle and a big draw for the curious. I do pity the tuna’s fate on route to the Mediterranean for procreation though.