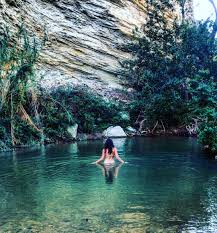 Known since ancient times, the Terme Segestane are mythical “SPA”. They are in fact the most important hydrothermal surface manifestation of western Sicily. Terme Segestane are natural thermal hot springs of volcanic origins, located in the province of Trapani, between the area of ​​Ponte Bagni and the Fiume Caldo (Terme Gorga).

They are surrounded by reeds and tamarisks and enclosed by rocky walls of white travertine streaked with pink. A picturesque landscape and above all free of charge, because you can immerse yourself in the small coves without spending a single euro.

The water in the water baths flows from the source to a temperature between 45 and 50 ° C, of chloro-sulphate-alkaline-earthy composition. There are three springs: Bagno delle Femmine, Grotta Regina and Nuova Sorgente to make thermal baths, mud and cave-therapy, useful in giving benefits in case of rheumatic, respiratory and skin diseases. I once took a bath there with my friends in the month of February, and still remember how warm and pleasant the water was. Yes, mythical spa indeed!

According to Strabo and Diodoro Siculo in their works, the Aquae Segestanae are linked to the myth of Hercules, who found refreshment in the warm waters made by the nymphs. A myth intertwined with history, so much so that the locality was renamed (erroneously) “Polle del Crimiso”, according to the name of an ancient river to which the fate of the ancient city of Entella is linked, then located as one of the two branches of the Belice.

Another sourced Greek legend states that the water is so hot at the behest of the deity Krimisòs who had raised the temperature to heat the nymph Egesta, who had escaped from the city of Troy destroyed by the war. This mythological tale links the foundation of Segesta to the arrival of the Trojans who would have chosen this city for the medical and beneficial properties of the warm waters, which today form the free baths of Segesta. 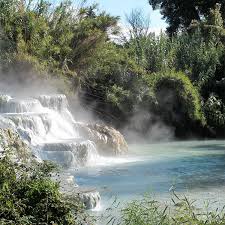 If you are looking for a wilder environment, just go up the river to find yourself immersed in a spectacular canyon with waterfalls, tamarisks and oleanders, some springs open right in the riverbed, causing a pleasant warming of the water.

From the spring area it is possible to follow on foot the river along which there are numerous horizontal-wheel mills, some of which date back to the twelfth century, and several citrus groves where the “Calatafimi ovaletto” is grown, a characteristic late-orange of these places.

Poplars, willows, elms and oleanders dot the territory, and among their branches it is not difficult to observe reed warblers, owl-eaters, or collared doves; in the waters of the Fiume Caldo then, with a little luck, you can meet the precious Sicilian marsh turtle.

The area is very suitable for pleasant excursions. After a relaxing dip in the thermal baths, you can visit the Doric Temple and amphitheatre of Segesta which is located in Calatafimi-Segesta. From the whole archaeological site, you can admire the beauty of the past, even a rich and varied vegetation. In the whole area of ​​Castellammare del Golfo, it is possible to go hiking and trekking.

To reach the site just enter the signs for “Acque Calde” on your browser or use this link. Remember not to leave a trace of your passage!

How to get to Terme Segestane: maps and directions