“Can we visit it? Can you get there by car or do you have to walk?” Many of our guests and visitors to Favignana ask these questions. I find this movie helpful and intriguing, although some parts reveal an unexpected reality . . .

A climb of 17 minutes at a brisk pace brings you to the entrance of this impressive prison and somewhat gloomy fortress. It certainly does not go unnoticed by newcomers to the island. I defy anyone not to feel any curiosity or temptation to explore the inside. It is located exactly at the summit of the mountain at 372 meters. 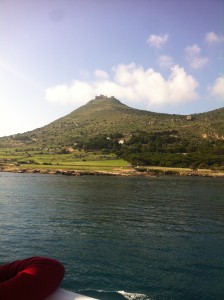 The fortress was built on an existing Saracen watch tower (IX century) by Roger the Norman in the XII century and like all such structures, it suffered several extensions under both the Aragon and Bourbon rule. The latter began from 1794 to send insurgents from the various riots to be imprisoned here in less than humane conditions. The prisoners were virtually entombed in cells dug into the rock below the fort. Some cells were comparable to the dark caverns or wells into which the prisoners were literally dropped. So much so that the place became infamous as “the pit of Santa Caterina”. Here Baron Giovanni Nicotera was imprisoned and tortured. After the landing of Garibaldi in Marsala,in 1860 a furious crowd having freed the last miserable prisoner, destroyed the the cells and anything that brought back memories of so much injustice.

The structure however remained standing and was transformed into a lighthouse. Even this fell into disuse since the mountain was often shrouded by clouds and thus invisible to the passing sailors who relied on it. The fort is often beaten by a relentless wind that blows from all sides and you can feel the strong currents within its dark corridors creating a very bleak scenario. Everything has been left as it was and no one after its destruction would have wished to return. While visiting the fortress prior to reading its history, I could feel the eeriness of its past. It has an unsettling atmosphere . . . Weird!! That was my impression.

Technical details: we recommend hiking boots and a jacket. Carry at least half a litre of water.

Security details: we suggest not to lean out completely from windows or the like since the winds are strong inside the building and generate impressive air currents and wind tunnels.